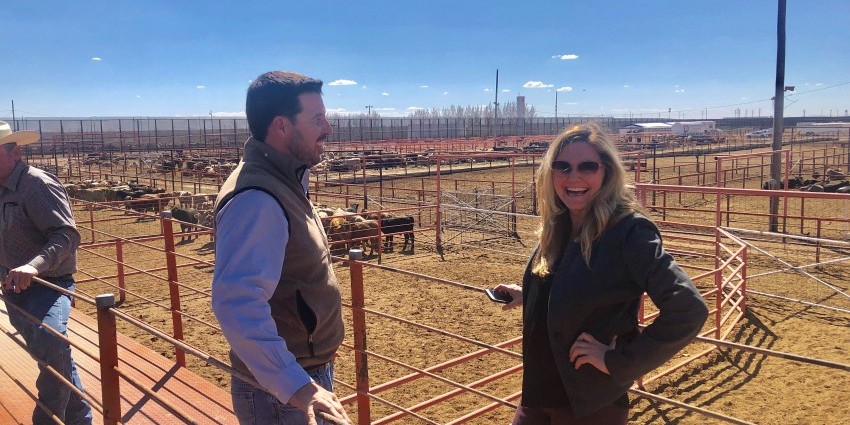 SANTA TERESA – I consider myself somewhat a cowgirl. After a summer of lifeguarding and working at the Esprit cart in Winrock Mall, I was 16 and had saved $700 to invest in cattle. Well…one cow…with my Uncle Steve. My first business deal, an investment for my future.

My cow died a year later. I lost all my money. Next career…

All this to say, that I’m no stranger to a couple hundred head of cattle. So when the acting director of the N.M. Border Authority offered to take me to the largest cattle crossing in North America, which happens to be in New Mexico, I was mildly interested and able to keep my cool – or so I thought. Then, standing on a catwalk,  thousands of cows streamed beneath me through the border to be sold to customers on the other side. I had no idea this amount of commerce was taking place between Mexico and the U.S.! This, my friends, is part of global trade – the smellier version, but no less important.

A mile away, the State of New Mexico’s Border Authority sits at the Santa Teresa Port of Entry. In January we had over 9,000 trucks, 46,000 personal vehicles and 10,000 pedestrians pass through just that crossing. An overwhelming take-away from this port and the one in Columbus is that both facilities service not just trade between two countries, but between neighbors and the people in these communities. They bind us as neighbors.

I witnessed no crisis, merely people going back and forth, trying to make a go of it.

Most impressive in terms of economic development was the industrial park that has sprouted in Santa Teresa. It’s full of companies that service the manufacturing plants in Mexico, providing parts and materials to the “maquiladoras.” That production niche is flourishing in New Mexico. My question: What type of manufacturing still works for our state and why? Feel free to chime in below in the comments.

Another realization, and to some this will sound incredibly silly, but trains are still alive and well. Living in Albuquerque, I know they travel through the center of town, but I’ve never focused on the amount of trade these railroads service. For those similar train-ignorant residents, New Mexico has Union Pacific and BNSF. Most of the railroad cars carry shipping containers that are loaded with materials or merchandise inside the factory floors. The trains come over the border in El Paso, and into intermodal or transmodal stations where the containers are stored until trucks can pick up the ready-loaded freight. The drivers load the containers onto flatbeds and take the shipments along 1-40 or I-25 to factories, warehouses or stores in the South and Midwest. We are the only border state without a direct train crossing…

We have a lot more that we can do on the border. The tariffs have hurt too many good people that farm, ranch and do business in New Mexico – that is obvious in Southern New Mexico.  I’ll be headed back soon and often.