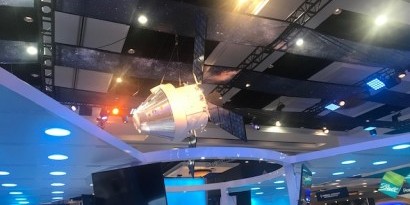 It’s officially called the National Space Symposium in Colorado Springs, but some call it Space Fling as in Spring Fling.  I call it Space Camp, because I knew relatively nothing about Space when I arrived and I drove away with a new-found appreciation and understanding of the colossal changes that are about to happen… And, New Mexico is going to be at the center of it all.

The Director of Spaceport America, Dan Hicks, and his fabulous team invited me to tag along to their annual convention  I had no idea what to expect, and my mind was blown.

Basically, space is literally about to take off. The U.S. has a new found directive with the Space Command and the initiative to be on the moon (i.e. colonize) in 5 years. In addition, similar to the film industry, there is a group of “New Space” companies that are challenging and disrupting the “Old Space” companies, household names that have been in the business for years.

The upstarts are nimble and take more risks. They are launching suborbital flights and into lower Earth orbit (LEO – I’m even learning the acronyms – so cool) with smaller rockets. Also space is no longer just about the military complex and massive missions, it’s about tourism, travel and more accessible research missions. This will play out big time for New Mexico and our tax-payer owned Spaceport America.

New Mexico’s Spaceport America has the largest restricted airspace of all the U.S. launch areas due to the fact that it’s right next to White Sands Missile Range. This is important.

To date, we’ve had 202 rocket launches at the Spaceport. What? Yes, that’s right. Dan has been busy.

The Spaceport and our economic development strategy going forward will be on lower orbit satellite manufacturing and launch. So much of our time in Colorado revolved around speaking with those types of partner companies that could make Spaceport America home.

Speaking of partners, we have one of the best — Virgin Galactic is expected to launch its first commercial flight in the near future at Spaceport,  so we  spent time with their  team and got to meet Sir Richard Branson.

This first launch and the state’s relationship with Virgin is probably one of the biggest events that will happen in New Mexico in my lifetime. It will signify a new era in space and an opportunity for New Mexico to shine.

So stay tuned and come down to the Spaceport June 18-22 for the Spaceport America Cup to watch students from around the world launch their rockets!